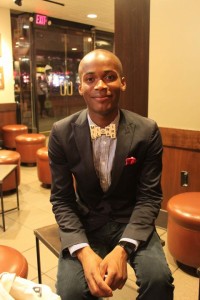 Some stories end well; others, in tragedy.

Tyrelle (Augustus) Shaw never graduated.  He dropped out of school to concentrate on his bow tie business and for a time things went well.  In April 2013 his photograph was featured on “Humans of New York,” and his truly original bow ties were sold in several boutiques.

However, in mid-June 2015 he committed suicide after, as he confessed in his blog, assaulting several Asian woman apparently at random on the streets of New York.

It is truly a tragedy for all involved.  Our sympathies go out to the families and friends of Augustus Shaw and to the women whose lives he affected.

Shaw is a former foster youth who is attending NYC’s SUNY Fashion institute of Technology with the help of FC2S’ Education Training Voucher program. He’s also an entrepreneur pioneering the art of the bow tie.

“I feel at home when I get dressed or decide to create something unique. I create each bow-tie by hand in New York City,” Shaw said during a brief interview.

Inspired by artists ranging from Andre 3000 to Jean-Michel Basquiat, Shaw makes his unique bow ties out of colorful dice, vintage woods and more. And business is booming.

Shaw’s gotten his bow ties out to some big-name celebrities: NBA all star Kevin Durant, Randy Jackson, and Adam Sandler to name a few. As he puts it, “My company is growing by the customer.”

What can we say, the man’s got swagger.