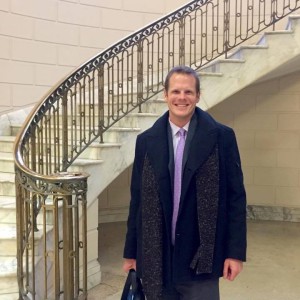 Chris Poulos has a pretty impressive resume: He’s currently a fellow at The Sentencing Project, chairs a subcommittee for the Mayor of Portland, Maine and will graduate with a law degree in 2016.

Although Chris has many great accomplishments, he still faces one problem: He cannot rent an apartment in Washington D.C. because Chris was a convicted felon.

On June 9, 2015, Foster Care to Success (FC2S) hosted an “Issues Day Panel” where five socially conscious experts visited Marymount University to speak with our 2015 Aim Higher students about issues that could expand their pathways to success.

Using his unique background, Poulos showed students the value in using adversity as a pathway to advocate for issues, both during school and after graduation.

FC2S spoke with Chris to learn more about why participating in Issues Day was important and what has attributed to his #journeytosuccess.

Q: Why was it important for you to be a part of Issues Day?

A: It was important for two reasons:

1. To spread the message about the work that I’m doing and the importance of criminal justice policy reform right now. Any opportunity to spread awareness about the issue of mass incarceration and the school-to-prison pipeline is something that I like to do and we like to do at The Sentencing Project.

2. With my own background, the opportunity to speak to students who have overcome some adversity in various areas of their own lives to go on to college and hopefully emerge from college as leaders inspired me to be a part of [FC2S’s] efforts.

Q: Why are you passionate about the school-to-prison pipeline and criminal justice policy reform?

A: There’s over 2.2 million people currently incarcerated in the U.S. and there’s tens of millions more who now carry some form of criminal conviction with them can have the effect of indefinite, collateral consequences for the rest of their lives. That’s a major issue, both the raw number of people that are currently incarcerated as well as all the people that have been affected by the criminal justice system and the effects on broader specific communities. Anything I can do to help raise awareness and hopefully find solutions besides mass incarceration to issues involving poverty, mental health and substance abuse I’m in favor of.

Q: Can you elaborate on how specific communities have been affected by this issue?

A: We can look at low income communities with high populations of color. There are some communities where at the most basic and fundamental level, there are so many black men incarcerated that it’s becoming troublesome for black women to even find a potential spouse.

When you have so many people taken out of the community or brought back into these communities with criminal records it affects the parents, the children, and the overall economy so it becomes a generational issue.

A: First learn about the issues so that you’re informed. I would urge students to read [The Sentencing Project’s] reports; we produce a lot of fact sheets, reports, and policy papers on this topic. And, of course, I would encourage them to read reports from other organizations as well.

Students should look at numbers so that they are prepared in any type of advocacy work they do so that they know what they’re talking about and understand the magnitude, seriousness and the details of this issue. Afterward, I would urge them to go ahead and get in touch with local leaders, both people that work in criminal justice policy and directly with political leaders because it’s the policymakers (at local, state and national levels) that can make the largest amount of changes.

One piece of advice is to start local. A college student can call a city counselor and can look and see what’s going on on the hill. At all levels it helps, but I think it can be particularly helpful at the local level and a great away to get involved.

Q: What was or is the most important factor in your journey to success?

In relation to what I can do on a daily basis to get from where I’ve been to where I am now,  small, concrete, consistent steps. Having a plan and taking the tiny steps necessary; it’s all about the tiny steps. A lot of the time, especially when we’re young, people have these broad plans but we forget to start doing the tiny steps that need to happen every day.

It’s all about those small concrete steps, which involves self-discipline. And just as important, if not more, is reaching out and asking for guidance from the people that came before us.

Also, develop a plan but to be open to changes at the same time. Don’t be so set on what you think is best for you. A lot of times we have a plan but if we’re open, the universe usually will have a plan that’s even greater for.

Q: What is the most important thing students should know about criminal justice policy reform, mass incarceration and the school-to-prison pipeline?

A: The most important thing is that we need to address the broader issues of poverty, lack of education, substance abuse and even racism that are connected to these issues, whether it’s directly or indirectly.

A: Never believe anyone who tells you you can’t go somewhere because of where you have been, or you can’t do something because of what you have done. Instead show them how.

Christopher Poulos is in his final year of law school at the University of Maine School of Law. He currently works and lives in Washington D.C., serving as the Legal Fellow at The Sentencing Project. Poulos also Chairs the Law Enforcement Assisted Diversion Program Subcommittee for the City of Portland, Maine in conjunction with Mayor Michael Brennan’s Substance Abuse Task Force and serves as President of the American Constitution Society at Maine Law. Prior to law school, Poulos overcame many obstacles including tragic family losses, addiction, homelessness, and a federal incarceration. He now dedicates his life to helping others overcome or avoid similar challenges and promotes a public health based approach to addiction. This fall, Poulos will return to Maine to participate in a TED talk where he will discuss his path to law school and current work to the TEDxDirigo audience.