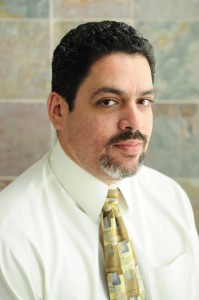 Nelson Mandela once said, “Social equality is the only basis of human happiness.” This could not be more true for Gabe Gonzalez, national campaign director for the Center for Community Change.

On June 9, 2015, Foster Care to Success (FC2S) hosted an “Issues Day Panel” where Gabe, one of five socially conscious experts, visited Marymount University to speak with our 2015 Aim Higher students about issues that could expand their pathways to success.

Gabe’s passion and commitment for social justice illuminated the faces of each and every student as he explained the significance of this field and how students can get involved—and find true happiness.

FC2S spoke with Gabe about why participating in Issues Day was important and what has attributed to his #journeytosuccess.

Q: Why was it important for you to be a part of issues day?

A: While I haven’t faced the same struggles that those young people have, I have certainly faced adversity in my life and I admire people who struggle through it; so, I wanted to be helpful.

Q: Why are you passionate about social justice?

A: I personally grew up poor and a person of color, so I’ve had the experience of being disempowered and it’s not a lot of fun. I don’t want that to happen to others. Also, I have a really active imagination and it’s easy for me to put myself in the shoes of others and imagine how they would feel. So, when that happens I just feel like you have to do something about.

Q: What advice would you give to students who are interested in entering the field of social justice?

A: Just do it.  A lot of working for social justice requires you to practice it and to make mistakes and to try it again. So, the first piece of advice I’d give them is just do it, get involved. When somebody says, “I need a volunteer,” say “I’ll do that”—whatever it may be.

The second thing I would strongly advise them, because this made all the difference in my career, is find someone to teach it to you. Find a mentor, find somebody you respect who is going to take the time to show you what they know. It’s not just do it and make it up on your own—everybody makes mistakes but you’ll make too many that way. It’s best to just do it but with somebody that you respect.

Q: What was the most important factor in your journey to success?

A: There are two moments that I can think of that are really important for getting me to where I am now:

1: I got really lucky the first time I got a job, and it was with one of those teachers—a man named Shel Trapp. He saw his role in social justice to train others. He taught me a whole lot of what I needed to know to be successful. I wouldn’t be here without him.

The second one was during the immigration front in 2006, I had the experience of not just being an organizer but being a leader and being a part of the social movement, which is different than social change. (Social movement is one aspect of social change.) I’ve never done this work the same way since then because I had the experience of being with a set of people that we were all in it together. As much as we might disagree, we were all in the struggle together and that made the difference.

Q: What is the most important thing students should know about social justice?

A: You’re not going to get rich! If you have the passion for it, it is so incredibly worth it. I couldn’t imagine doing anything else; it defines me. I really think for those who have the passion it’s absolutely worth it…but you won’t get rich.

Gabe Gonzalez, national campaign director at the Center for Community Change (CCC), has worked as a community organizer and strategist for over twenty years. In that time he has worked on diverse issues as immigration, housing and education policy. He is currently focused on the issue of mass incarceration as well as how organizing in the 21st century must innovate in order to achieve meaningful social change. Before joining CCC, Gabe served as director of organizing for the Illinois Coalition for Immigrant and Refugee Rights (ICIRR), where he developed the New Americans Voter Project. From 1997-2000, he was director of Northwest Neighborhood Federation in Chicago. He has also worked for a number of national and Illinois based organizations. He is based in Chicago.