Home » Blog » Students from the Foster Care System Speak Out 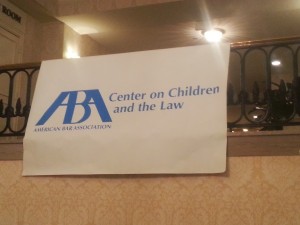 In a panel at the American Bar Association Conference on Children and the Law last week,  three successful students who’ve been in the foster system discussed what it was like trying to balance school, work, and the demands of living in the child welfare system. In their panel discussion – “Voices from the Child Welfare System” – the students also discussed the meaning of attorneys in their lives as foster youth.

Ricardo Saldana Marquez, a 20 year old student at the University of Nevada – Reno, said that he was doing so well while he was in care that he felt like he was rushed out of the child welfare system before he was ready. He cautioned that students who are doing well don’t need less help and felt like he missed out on some important opportunities due to the rush. He did not even know he had an attorney who could have acted as an advocate for him in the court system. Marquez advises that students use their senior years in high school to enjoy being in school. During his senior year in high school, he stopped working at his job and focused on participating on school sports teams and activities. “That was the year I enjoyed being a youth,” he said.

“Ask the child,” said nursing student Erin Mosley. “Even though they’re young, they know what they want. It’s up to you as an adult to help mold them. They feel like they don’t have a voice, but they do have a voice. They just don’t know how to use it.” Mosley credits a supportive foster family for her achievements. Her case worker also was instrumental to her graduating from high school and entering secondary school to study nursing.

Twenty-one year old Kayla VanDyke has always been highly motivated, but learned about the importance of having an advocate when she learned that she needed court approval to study in Japan. Previously, she was unaware of the importance of lawyers and had lost visitation rights with her younger siblings. “The expectation of failure by the court system was something I really had to overcome,” said VanDyke. “I had no idea what a lawyer was supposed to be doing. Now that I know what the lawyer was supposed to be be doing, it feels tragic because of the opportunity lost.”

VanDyke also discussed the importance of education, “Education specifically for foster youth takes a team. If you don’t have a team fighting and advocationg for you, education can fall by the wayside.” She will be attending Hamline University in the fall.